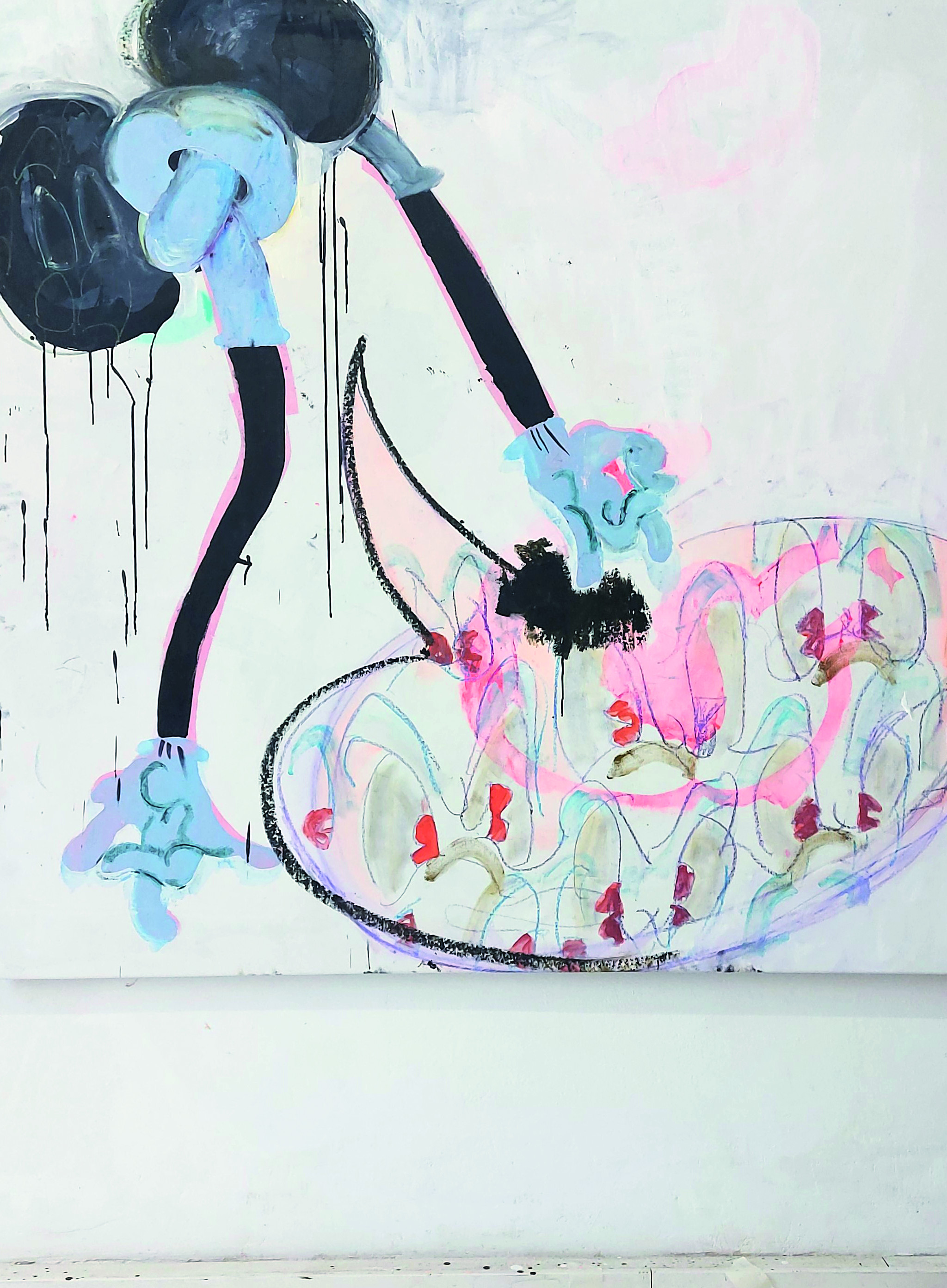 The title “Is it Me? Am I the Drama?” (quoted from American drag queen and online sensation, Scarlet Envy) provides a narrative and performative space for the diversity of different artistic positions to discuss contemporary issues. In numerous Tik Tok and Instagram reels, this quote by Scarlet Envy is used to comment ironically on others. This action of appropriating a varied construction of otherness and self-image within a queer identity is thus a curatorial reference for the exhibition. The intention is to open up the diversity of all possible starting points for the artists’ work and to resist making separable differences in the sense of the diversity of this work and its varied meaning.

The annual exhibition will again be a sales exhibition, as in the past years. 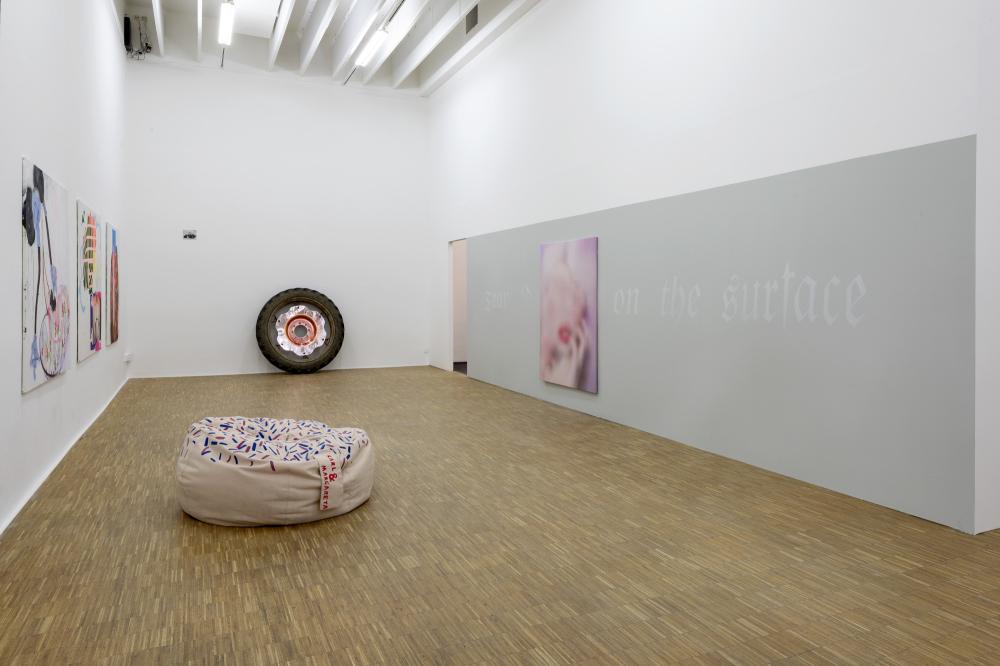 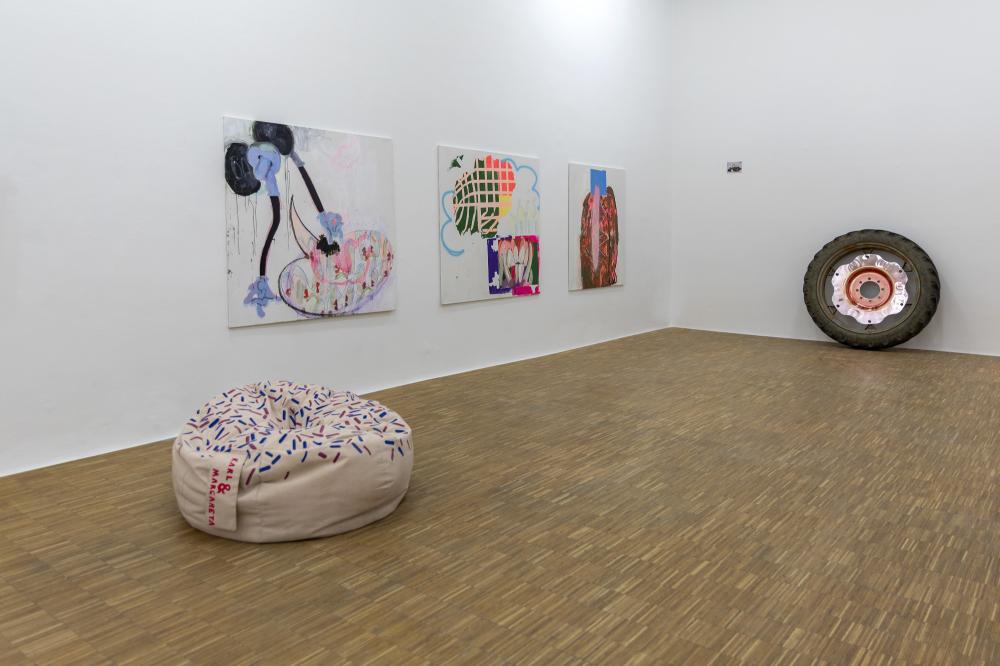 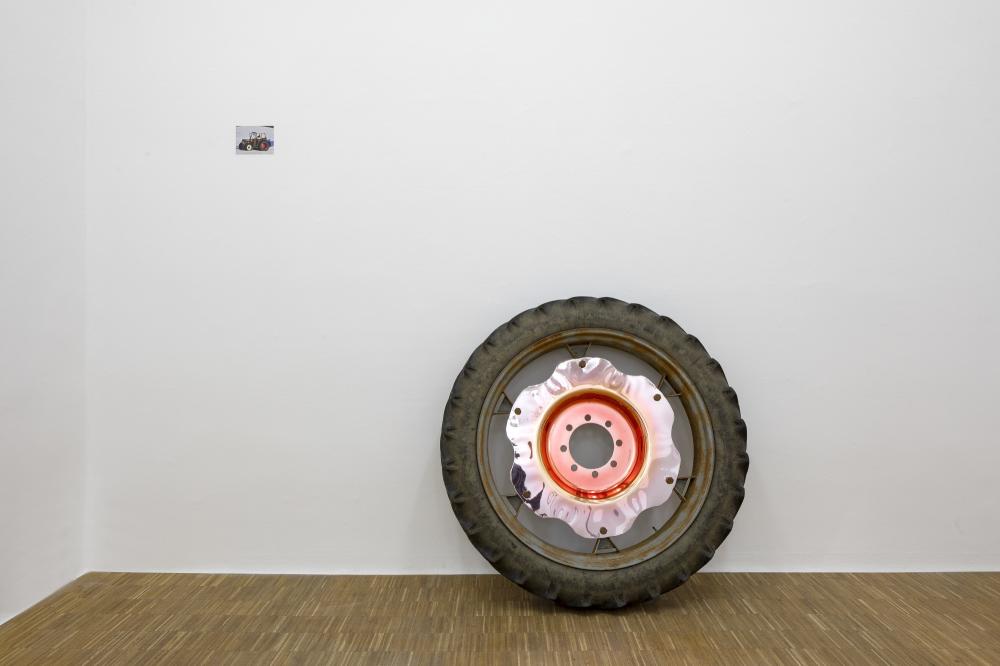 Micha Wille (born 1978 in Landeck, lives in Vienna) exposes her large-format paintings to this identity-transcending punch line. Mostly free-standing on a white background, she combines popular-cultural references with critical and feminist approaches to art. Her painting titles also speak this language, as one of the exhibited works shows: “I know your concept of art is aimed directly at my heart, but I’ve got My Tongue Sticking out to Protect Me.”

Margareta Klose (born 1993 in Berlin, lives in Salzburg, Vienna and Brussels) deals with the issues of living together in the context of a queer-feminist, artistic practice. In 2021, she conceived the two donut-shaped beanbags in Vienna’s 2nd district together with Karl Michael and realized them as a meeting platform for district residents of different origins in public space. For this purpose, she organized various meetings in women's groups and cooking classes for joint exchange.

This year’s winners of the Salzburg Kunstverein’s Förderpreis, the artist collective Alpine Gothic (consisting of Christine Breitfuß born 1971 in Schwarzach im Pongau, Erik Hable born 1968 in Linz, lives in Salzburg and Wolfgang Wirth born 1966 in Innsbruck, lives in Vienna), founded in 2009, work with different participatory, performative and site-specific interventions on the contemporary concept of culture, art and homeland. The exhibition features a work from the series “Alpenglühen am Wiesenrand” (2018-2019), for which they not only determined the color of Alpenglühen together with the Maschinenring Landesgeschäftsstelle St. Johann, but also painted different rims of commercial vehicles in agricultural use with this hue.

Christiane Peschek (b. 1984, lives and works in the Cloud) takes up the ego construction of the human being at the interface between digital and real space in her artistic exploration. The wall writing “Trapped on the Surface” is only visible to viewers for a longer period of time through flash light and digital image recording. She combines the lettering with a digitally reworked portrait view on polar fleece, which with its blurriness reflects on the selfie culture described above. 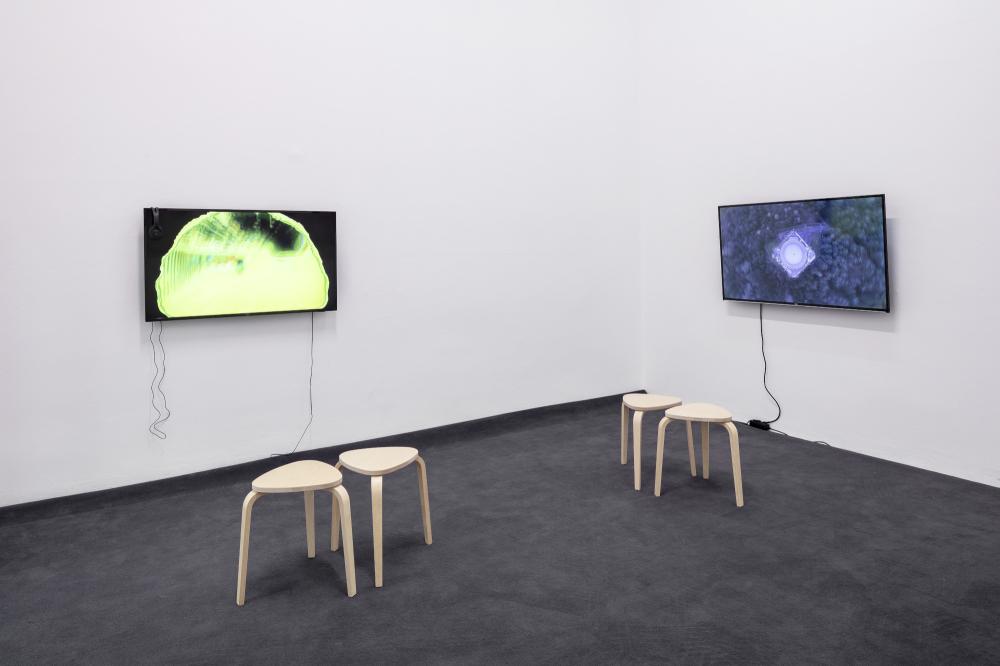 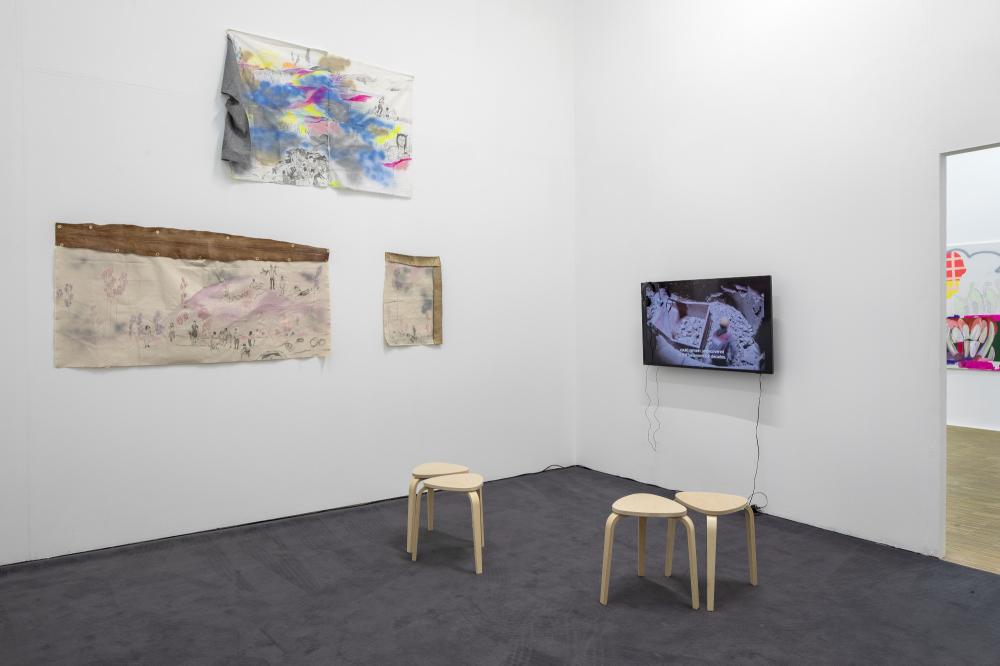 In her video “Sancta Barbara – Abgesang an den Kohleabbau” Sigrid Langrehr (born 1968 in Salzburg, lives in Salzburg) examines a last remaining male domain by means of the decline of mining. This world is full of heroes, saints, myths and fears, as well as characters of longing and fairy tales. The fictional chorale and the title of the film refer to St. Barbara, the patron saint of miners, which the artist underlay with found-footage scenes that she edited and collaged with a specially developed filter.

In her video work “Yaw,” Katharina Gruzei (born 1983, lives in Linz) unites two supposedly distant worlds under the concept of the “gold hood.” In addition to the customary headdress that is designated by this term, Austria's military air surveillance system also bears the name “Goldhaube.” The artist takes up this aspect and dedicates herself to homeland security in a double sense, the custom and the military. While the Austria-wide network of radar installations watches over Austria’s borders, customs preserve traditions and keep them alive through constant re-enactment. Inherent in both golden hoods is that they define the “own” through the demarcation to the “other.”

On delicate and finely sewn together fabrics, which are only attached to the wall with nails, Julia Zöhrer (born 1992 in Gmunden, lives in Linz) creates her fantastic worlds of figures. With work titles like “Eating All Your Queens And Kings, Blessed And Burned And Godless Underneath,” she supports this endeavour.

The filmmaker and artist Johannes Gierlinger (born 1985 in Salzburg) shows with the 98-minute essayistic film “Die vergangenen Zünfte” (“The Past Guilds”), shot on 16 mm, a political-poetic reflection on the nature and effects of revolutions. The exemplary starting point is the March Revolution of 1848 in Vienna. The film connects historical struggles with contemporary forms of resistance and reflects on how collective memories are inscribed in the present of a city and its inhabitants. (quote artist) 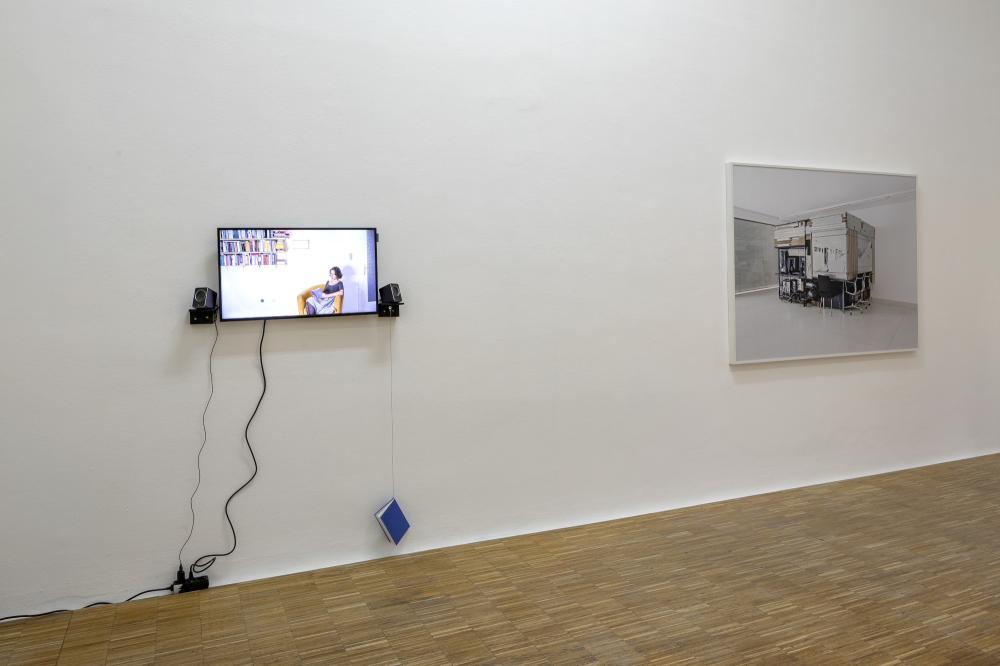 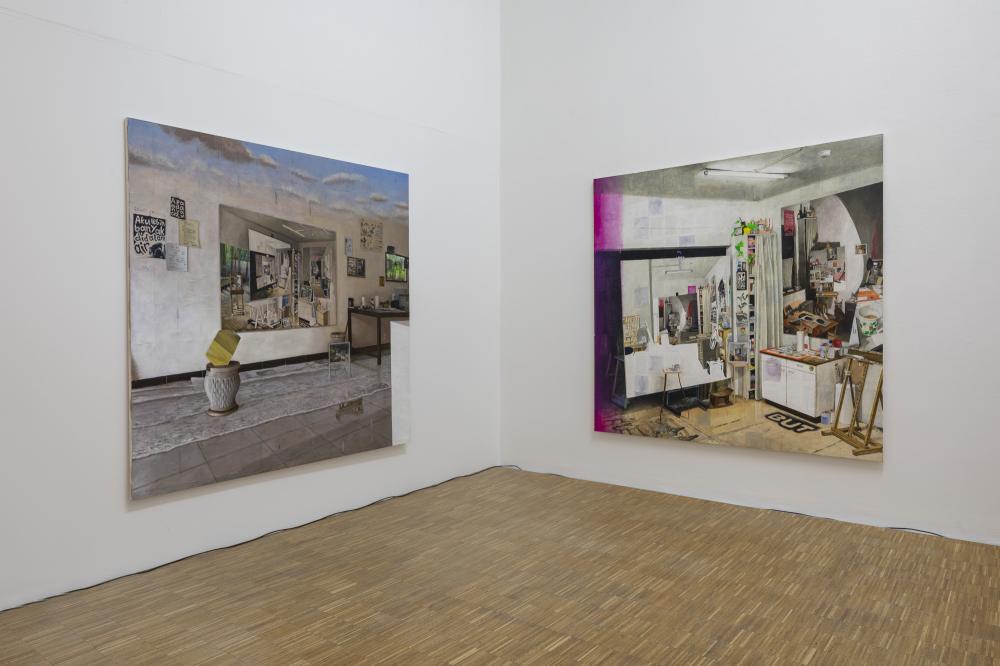 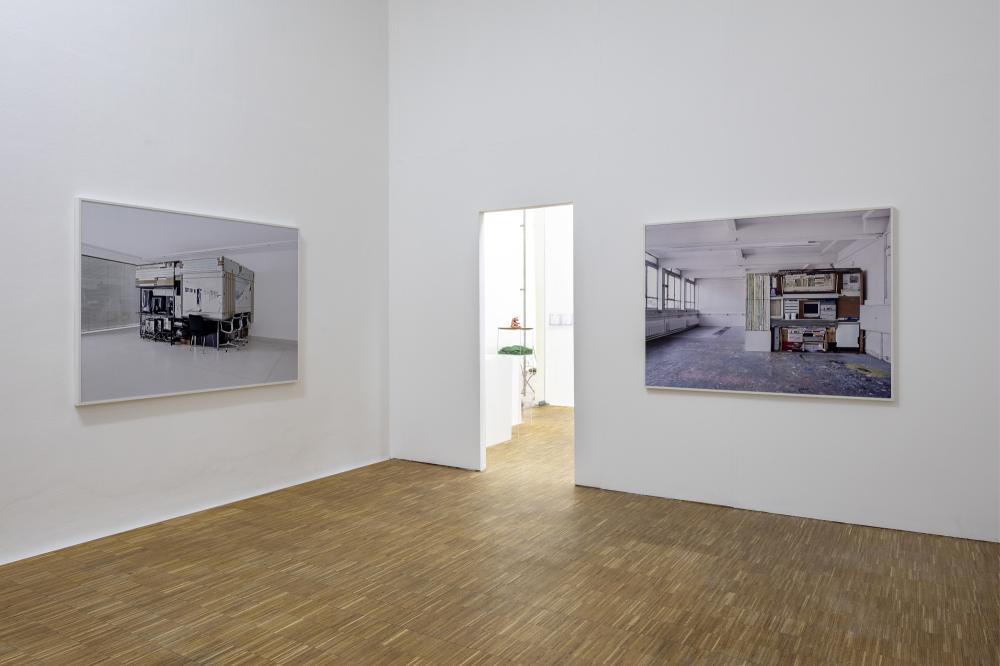 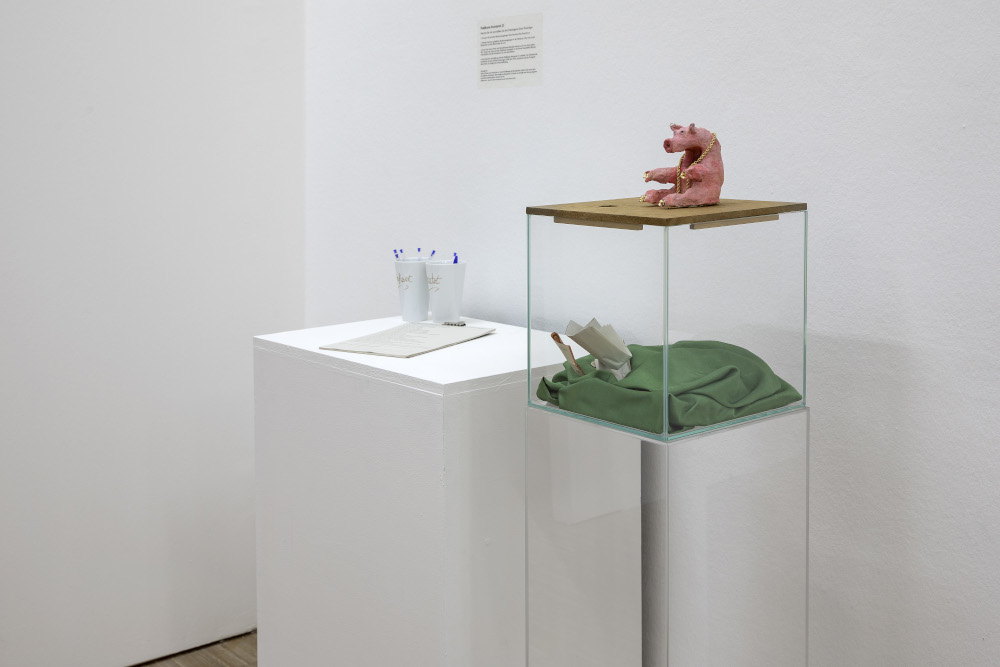 In the work “ohne rückgabe ohne garantie” (without return without guarantee), the artist Lisa Großkopf (born 1989 in Vienna, lives in Vienna) reads out in a 17-minute video various private sales offers of artworks that she found on an Internet platform in 2021. The classified ad text opens up a parallel world to the usual academically confirmed theories of art and discourses internal to the art business, thus commenting ironically on the search for a generally comprehensible concept of art. The artist has compiled the digital classified ads in a limited edition book, which is available at the Salzburg Kunstverein.

The painter Jari Genser (born 1983 in Salzburg, lives in Vienna) also implements the condensation of the studio space in his series of paintings “Strafe” by not layering the working materials, but by repeating the studio situation to infinity in the picture composition in the making. This paradoxical doubling blurs not only the plane of time, but also the real studio space with the fictional pictorial space.

Elisabeth Grübl (born in 1961 in Tamsweg, lives in Vienna) has been appropriating the studio, as a place of artistic practice, from her colleagues in the proverbial sense since 2007 by layering all found studio objects into a cube and photographing them. In the exhibition she shows the “Studio # 7 Thomas Roth / Frankfurt” and the “Studio # 16 Walter Niedermayr / Bolzano.”

ARTgenossen, an art education and mediation group based in Salzburg since 2001, initiates an audience award on the occasion and additionally draws attention to the monetary situation of the artists. Visitors are invited to vote for the winner and are also asked to make a donation, the total amount of which will be the prize money. The prize will be awarded at the end of the exhibition. We hope for your generous participation! 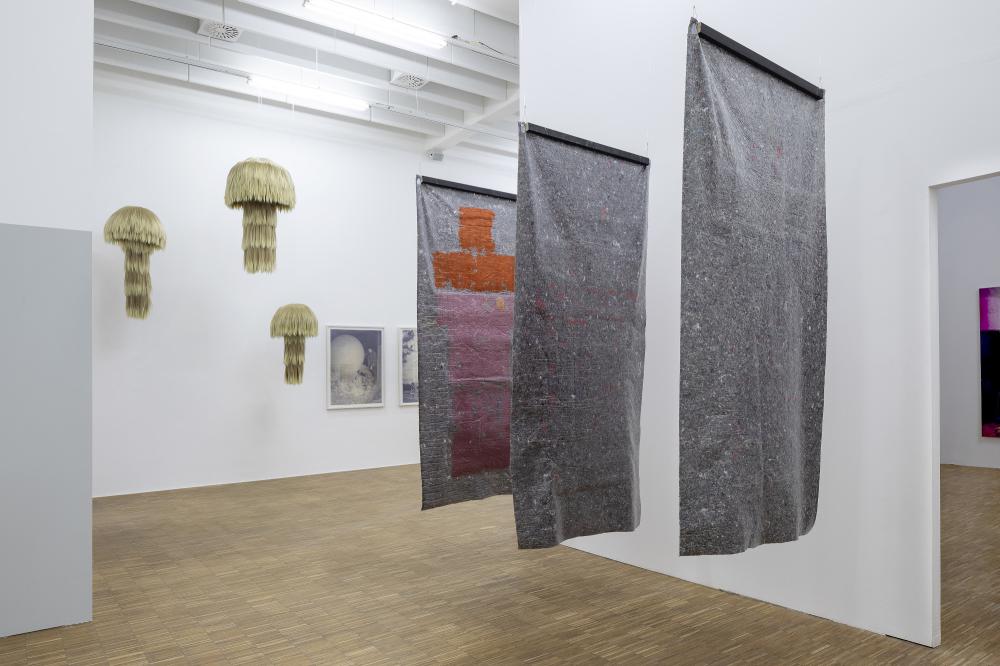 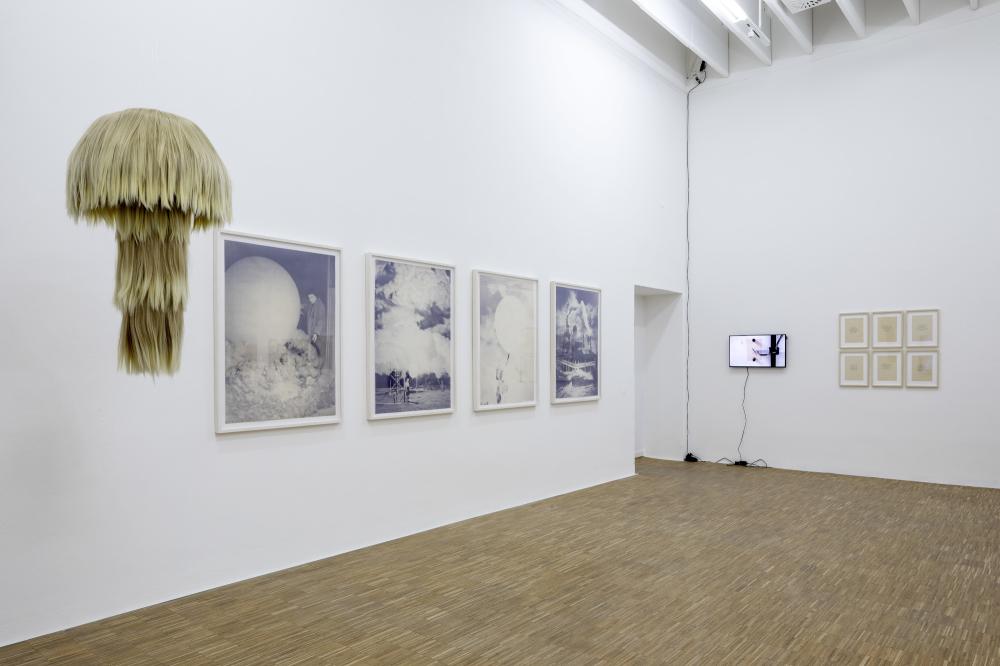 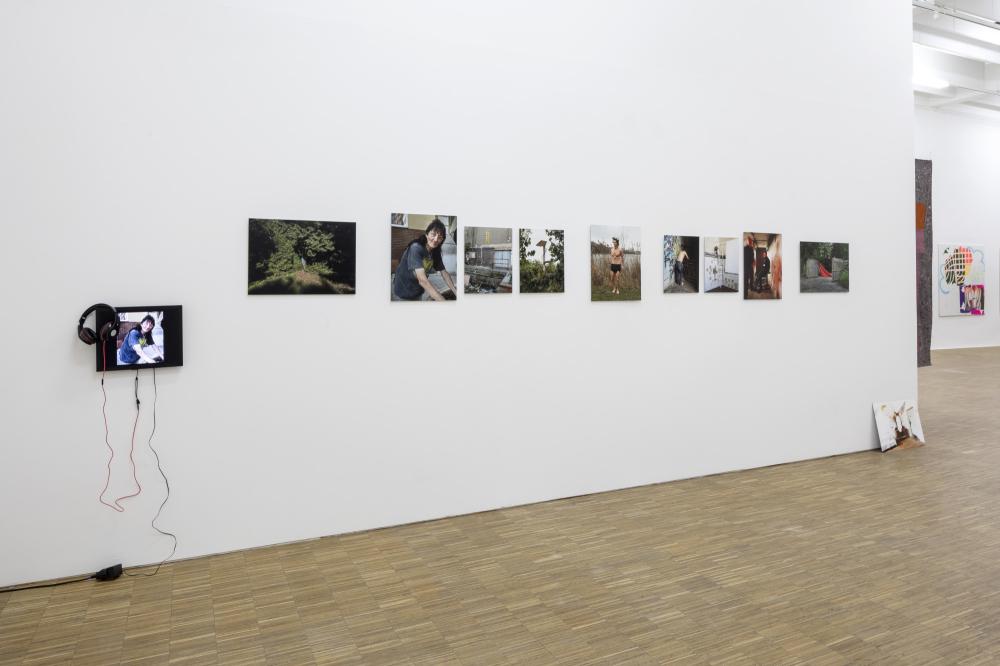 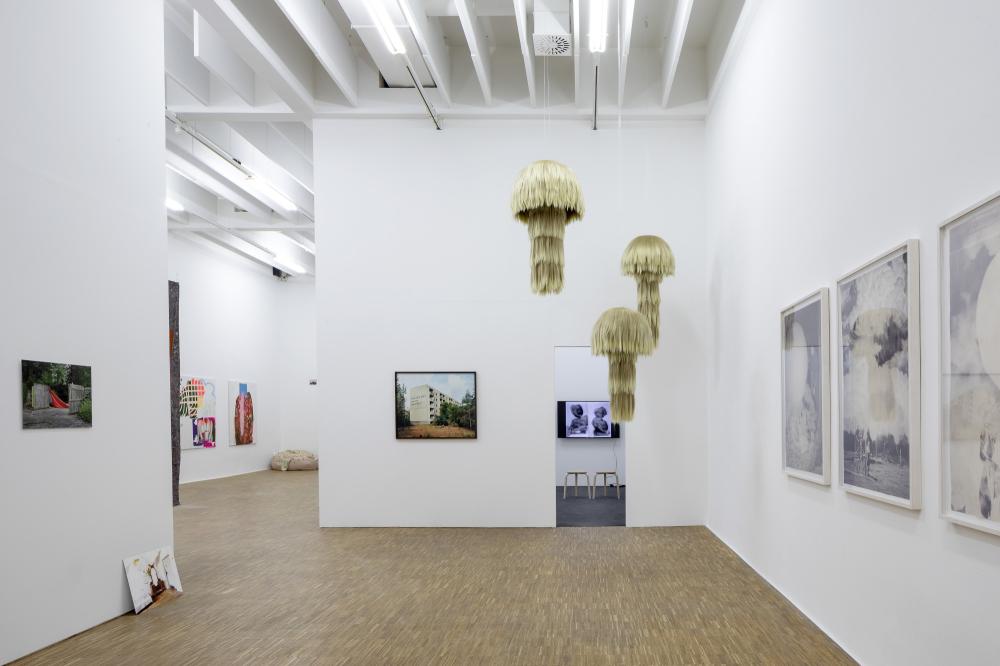 Beate Ronacher (born 1979 in Salzburg, lives in Hallein) also focuses on urban space as a performative meeting place in her artistic practice. Most recently, she realized the performance “Footfalls (Extended)” in Salzburg’s urban space in 2021. On a body-length, gray cover flow with a cross painted on it in red, she laid down on the ground in different places in the outdoor space. In the context of the members’ exhibition she shows the three works “Resurrection No. 1, No. 3 and No. 5,” which refer to the performances discussed above.

Tina Hainschwang (born 1986 in Salzburg, lives in Salzburg) floods the exhibition space of the Künstler*innen Haus with her bizarre and grotesque hair jellyfish. We breathe life into the objects dancing above us from the ceiling and let them become a natural spectacle like a cosmos of unusual encounters.

The work series “Anthropocene Blues” by Elisabeth Schmirl (1980 in Salzburg, lives in Salzburg and Vienna), whose exhibition title is borrowed from a poem by the American beat poet Anne Waldmann (b. 1945/US), approaches a different political culture of memory. For this she uses archive photographs of experiments of American weather stations, which stereotypically always show women who are instructed before releasing the weather balloon to hold it for photographic documentation. In her elaborately reworked diazotypes, a chemical-photographic light-printing process, she alienates the historical image and overwrites it with a political context that reaches into the present and, in keeping with the work's title, documents man's intervention in the environment.

Since 2021, Manuel Tozzi (born 1994 in Salzburg, lives in Berlin) has been programming a neural network that, based on a machine learning algorithm, has so far written 15 prosaic texts under the work title “Poems of a Romantic Machine.” The poem, which exposes the modern “technoromantic” human being and relies on the algorithm of a poetic creativity, is at the same time an ironic commentary on the current situation in art business.

Motahar Amiri (born 1985 in Tehran, lives in Salzburg) almost sums up his photographic journey through the Czech Republic and Slovakia in 2018 with “The Monster In Cocoon And The Weeping Trees.” Eye-catching for him were the building complexes abandoned from the bygone era that had lost their function but were increasingly being repurposed by people. Amiri began to tell the stories of the people in portraits.

Eginhartz Kanter (born 1984, lives in Linz) also addresses the political system change by means of the obsolete prefabricated concrete slab architecture of the former GDR, by painting and photographing the sentence “What would have become of me” on the windowless broadside. The orphaned and standardized fast-track construction method for gaining living space thus becomes the personal residual memory of those former residents and the associated biographical breaks and ideological overwritings. 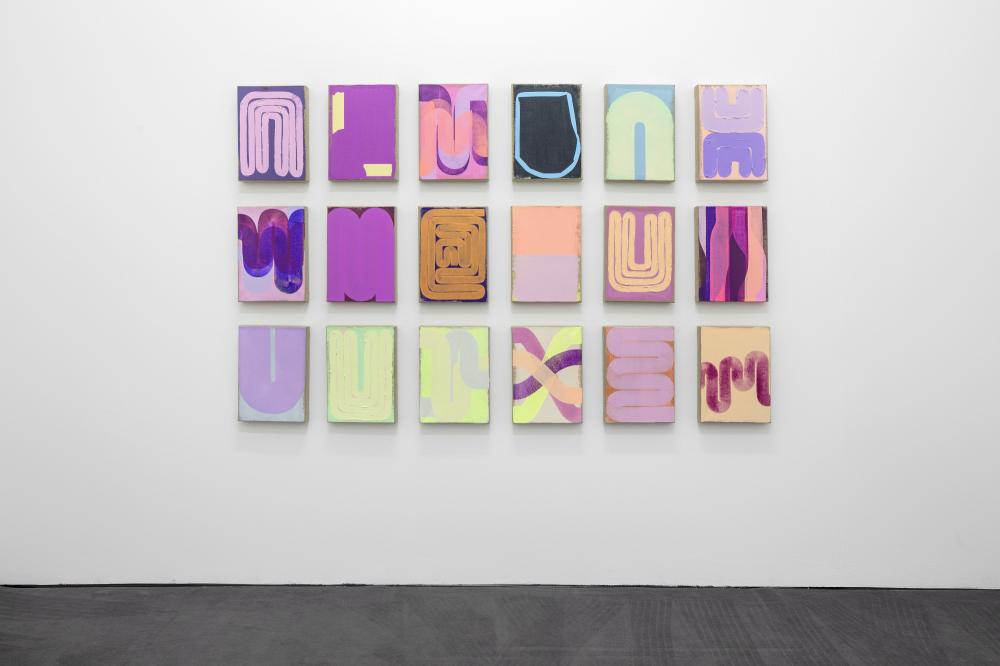 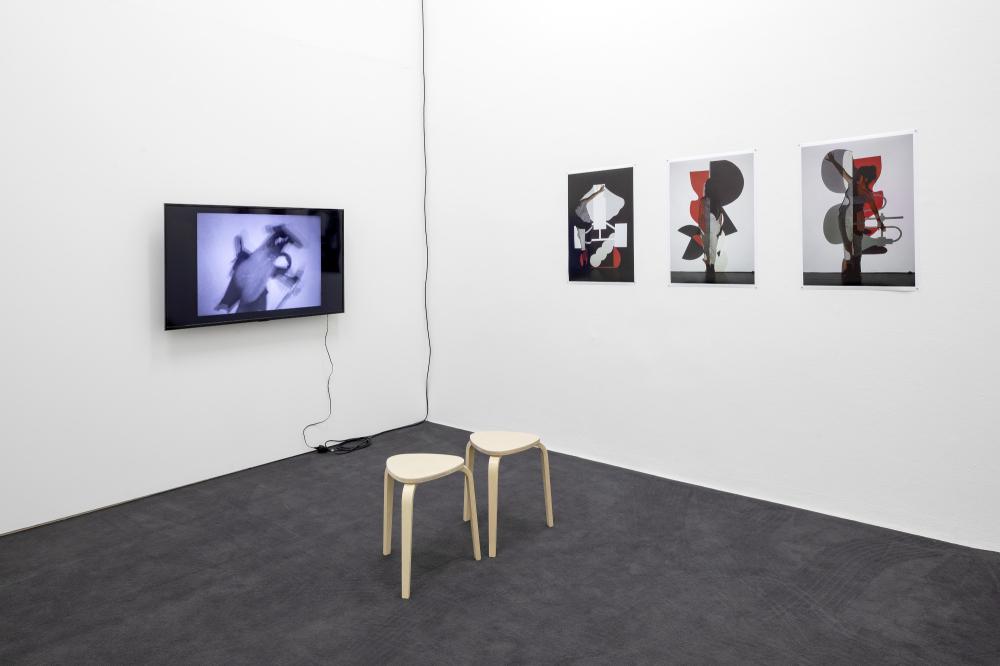 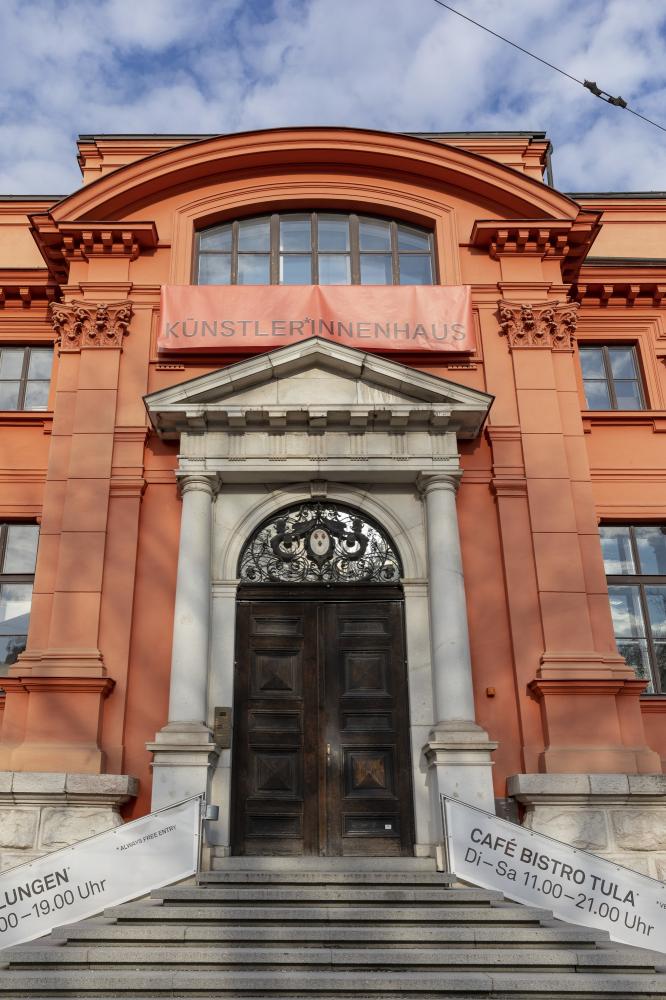 The motif of abstract form-finding is also adopted by Julia Brennacher (born 1983 in Innsbruck, lives in Innsbruck) in her small-format, pastel-colored oil paintings. The shaping resembles the brush width of the painting application and complements itself to a rhythmically balanced surface composition.

Nicole Prutsch (born 1980, lives in Cambridge) weaves short experimental film sequences from historical film fragments from the history of science into abstract collages that seem like rhythmically pulsating body fragments. In “T, A, T” (2020), for example, she cites a psychological test procedure developed in the 1930s by Henry A. Murray and Christina D. Morgan, on the basis of which clients had to tell stories using 32 different picture postcards. Or in “Cuts and Shifts - after Potteau” (2019), she refers to the French anthropologist of the same name.

The photographic superimpositions of Gunda Gruber (born 1971 in Salzburg, lives in Salzburg) translate the body into ornaments. In the series of works “Konnex” (2021), the artist traverses her own body with projected white/black and red colored form elements.

Isabella Heigl (born 1989 in Haag am Hausruck, lives in Salzburg) exposes the Künstlerhaus to a feminist reflection and revision in its naming on the façade, in which she temporarily renames it Künstler*innenhaus for the exhibition period. In the meantime, we understand our present in a reassessment of gender perception and designation. Therefore, we hope that this work will open awareness and discussion on this topic.